Spotted in the wild: A Wknd interview with Charudutt Mishra, snow leopard man 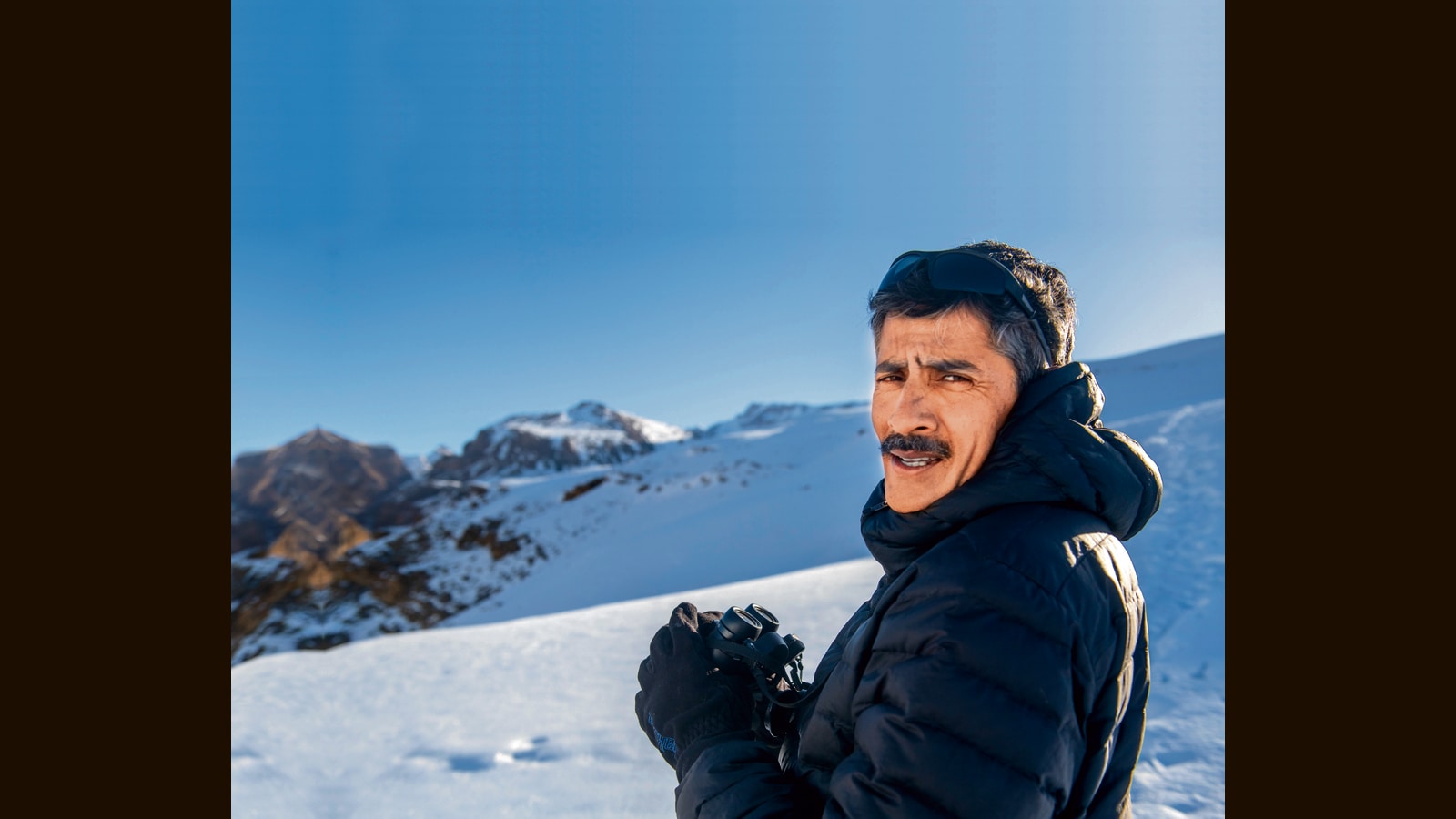 Nobody knows how many snow leopards there are in the wild, not even Charudutt Mishra, the world’s foremost expert on the big cat, and he’s been studying them for 25 years. The spotted grey feline that lives in the snowcapped mountains of Asia is so elusive that a single photograph taken in 1970 circulated for two decades.

Mishra had his first sighting in 2006, a decade after he started working in the field. “After crossing the Parilungbi river that drains into the Spiti Valley in Himachal Pradesh, we were climbing up a steep gorge. Each time I halted to catch my breath, I scanned the opposite slope. Suddenly, what I had thought was a rock came alive,” says Mishra, 51. “It was sublime. The chill from the ice-cold river disappeared. The pain from taking a fall in the water was instantly forgotten.”

Despite their name and habitat, snow leopards avoid snow when they can, he adds. “The Monpa people of Arunachal Pradesh have a much more appropriate name for them: Takshen, leopard of the rocks.”

There are an estimated 4,000 to 6,500 snow leopards left in the wild. “But these are just guesses,” Mishra says. The animal is so shy and elusive, its habitats so hard to access, that there has never been a comprehensive count (one of the things Mishra is now working to change, across 12 countries.)

What is certain is that this is an at-risk species. In addition to the natural challenges it faces, it has been classified as vulnerable by the International Union for Conservation of Nature (IUCN). As with most species, the reasons are interlinked — overgrazing by livestock has caused populations of the snow leopard’s natural prey to dwindle, forcing it to snatch livestock from local human settlements, which has prompted scores of retaliatory killings over decades. Meanwhile, its habitat is changing too, as a result of the climate crisis and current human activity (projects even in its remote mountain habitats include mines and roads).

In 1996, when Mishra first visited the Spiti Valley for his doctoral research in ecology and natural resource conservation, a snow leopard had recently entered the village of Kibber and killed some heads of livestock in a corral. Locals told him a graphic tale of how they killed the leopard. What was agonising to hear, Mishra adds, was that the villagers then lined up to beat the carcass and curse it for causing them so much hardship.

That’s the first half of a story that Mishra often tells. The second half is set 17 years later, and has a happy ending. “In 2019, an older snow leopard fell into a gorge and died,” Mishra says. “This time around, the people of Kibber retrieved the carcass and cremated it with full Buddhist rites, and the auspicious scarf reserved for revered guests.”

For his role in driving this change, Mishra won his first Whitley award, in 2005. Last week, he won his second.

That first one was for setting up India’s first community-run livestock insurance programme, in Spiti. Launched in 2002 and still highly successful, it insures each head of livestock for a certain sum, which is paid out in case of a snow-leopard attack.

Under the scheme, herders must agree to let the snow leopard take the livestock it has killed, so it doesn’t unduly kill more; and they must commit to preserving small swathes of grassland as grazing grounds for its natural prey, which are wild sheep, wild goats, blue sheep and the ibex.

The programme is sustained through grants and the funds such as the Whitley prize of of £100,000 (about ₹95 lakh) and has expanded over the years to several other countries with snow leopard habitats, including Mongolia, Pakistan and China.

Mishra won this year’s Whitley award for taking his larger conservation efforts global. In 2015, he played a key role in a multi-organisational effort to get all 12 snow leopard range countries to form a conservation alliance. Already, this Global Snow Leopard and Ecosystem Protection Program (GSLEP) is working to combat illegal wildlife trade and poaching, ease human-animal conflict and promote conservation programmes. It is also conducting the world’s first snow-leopard population assessment, with a final tally expected in end-2023.

In Himachal Pradesh, the count has been conducted by researchers from the Nature Conservation Foundation, a non-governmental conservation and research organisation that Mishra co-founded in 1996. Mishra also serves as director of the Seattle-based Snow Leopard Trust. And in 2009 he helped draft and formalise Project Snow Leopard with the Government of India, which serves as a guiding policy for snow leopard conservation, with a special emphasis on grassroot involvement.

The snow leopard is so elusive, its nickname is Ghost of the Mountains. It lives at higher altitudes than any other big cat.

When Mishra began his field career, in 1996, these regions were a lot more remote than they are now. He was often 100 km from the nearest town. What helped, he says, was the warmth with which he was welcomed into the community at Kibber, where he started out. “I had the privilege of being accepted as one of their own. High-altitude volleyball matches and parties involving local brews made it all rather easy and fun.”

Technology has changed a lot in these regions. There are cellphones and satellite TV; roads stay open through the winter. And in research and conservation, technology is making it possible to actually get to know the Ghost of the Mountains at least a bit better.

Since 2008, Mishra’s team has been working with the Snow Leopard Trust’s Mongolian partner on long-term GPS collaring and monitoring. Over 10 years, 33 individuals across generations have been tracked. “This is a larger dataset than that the combined dataset of all the other collaring studies ever undertaken on snow leopards,” Mishra says.

GPS monitoring now shows that the home range of a snow leopard is about 100 sq km for females and 200 sq km for males. “This tells us, for instance, that the protected areas across High-Mountain Asia are too small to protect a viable population. So if we really want to protect snow leopards, we have to look beyond and we have to build relationships with locals. The way I see it, interaction between snow leopards, livestock and people is inevitable.”

It’s important to get this effort right, he adds, in scale and approach. “Conservation partnerships with local communities must be founded on mutual respect and trust. These are not easy and take a long time to cultivate.”

Mishra plans to use the Whitley prize money to launch a training programme for conservationists and local communities that will be rolled out across 1.5 lakh sq km of snow-leopard habitat, spread across 12 countries.

“A lot of conservation is based on human relationships. Here, there is no room for deceit, maleficence, underhandedness and harm. There must be integrative negotiations and not positional bargaining. The relationship must be that of equal partners, not donor-recipient,” he says.

Retaliatory killings of snow leopards among partner communities in Spiti and Ladakh has fallen to zero, so it’s safe to say Mishra knows what he’s talking about.

* Snow leopards live in the glacial highlands of Central Asia, a region that is spread across 12 countries: China (which is estimated to have the largest snow-leopard population), Nepal, Bhutan, India, Pakistan, Afghanistan, Tajikistan, Kyrgyzstan, Uzbekistan, Kazakhstan, Mongolia and Russia.

* In India, snow leopards live in the Higher Himalayas and Trans-Himalayas. Their strongholds are Ladakh and the Spiti Valley. They also occur above the treeline in parts of Jammu and Kashmir, Himachal Pradesh, Uttarakhand, Sikkim and Arunachal Pradesh.

* The animal is a marvel. Its dense fur makes it possible for it to survive in temperatures as low as -40 degrees Celsius. Giant paws have evolved to walk on snow. A long bushy tail serves as balancing aid and as a bit of cover for warmth when sleeping. Its fur has evolved to so exactly match its rocky surroundings (despite its English name, it tends to avoid snow), that it is more or less impossible to spot one until it moves.

Menstrual leave: A blessing or a curse?