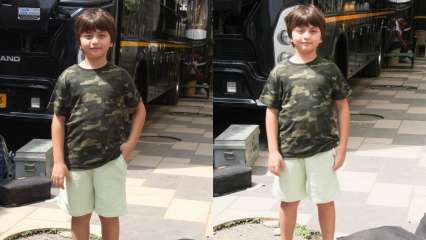 Shah Rukh Khan‘s little prince AbRam Khan was spotted at his mother Gauri Khan’s studio, and he got papped alone for the first time by the media photographers. As soon as the photos and videos of AbRam surfaced, it went viral instantly, as Jr Khan won netizens with his dignified mannerism.

In a video shared by Viral Bhayani, a person poses with AbRam, and he kept his arm over AbRam’s shoulder. The little one didn’t show any sign of discontent and was smiling throughout his photo session. This gesture of AbRam took over the internet by storm. The netizens are in awe of Khan’s mellow down behaviour. A user added, “Soo polite …he is …” Another user said, “So well mannered.” One of the netizens added, “Very calm….no air.” While another netizen pronounced him as “Aane vaali sadii ka super star.” Many users found him ‘cute’ and ‘innocent,’ but his poised attitude definitely reflected Shah Rukh’s demeanour.

One user even compared him and Taimur, and said that the former is much more well behaved than the latter, “Such a darling! He looks so cute and well-behaved…unlike Taimur.” Another user added, “So cute not like taimur.” “He is much better than other arrogant star’s kids,” added another user.

Today, AbRam’s sister Suhana Khan’s debut film The Archies teaser was released, and papa Shah Rukh Khan penned a motivational note for her on his Instagram. Shah Rukh said, “And remember @suhanakhan2 you are never going to be perfect….but being yourself is the closest to that. Be kind and giving as an actor….the brickbats and applause is not yours to keep….the part of you that gets left behind on screen will always belong to you….u have come a long way baby….but the road to peoples heart is unending…..stride forth and make as many smile as you can. Now let there be Light….Camera and Action!”