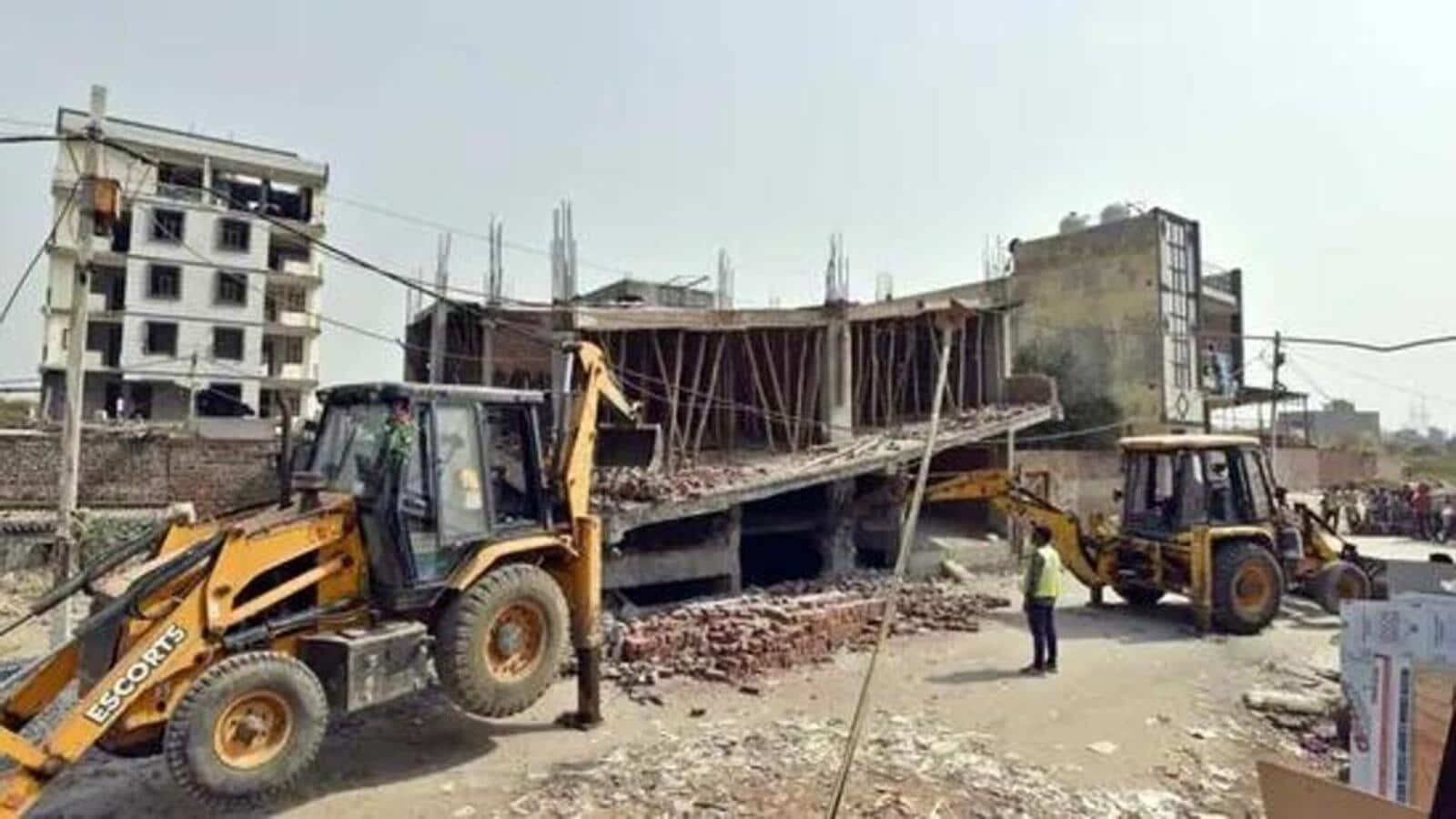 NEW DELHI: The Kanchan Kunj area where four illegal buildings were partially or fully demolished by the South Delhi Municipal Corporation is part of the Madanpur Khadar area, one of the 1,700 unauthorised colonies in Delhi, local residents said on Thursday even as the civic officials said the area has come up illegally on Yamuna floodplains.

Sharif Ali, who claimed to be the president of the local residents association, said while the Centre was regularising unauthorised colonies across Delhi, their area was being targeted because of predominant Muslim population. “Why bulldozers are not demolishing houses in other unauthorised colonies,” he added.

To be sure, all three municipal corporations are removing illegal structures in both legal and unauthorised colonies during an ongoing drive across the city.

SDMC officials who asked not to be named insisted that the structures demolished on Thursday stood on the Yamuna floodplain, marked as O-zone in the Master Plan of Delhi-2021. According to the plan, no construction is allowed in the ecologically sensitive zone.

During Thursday’s drive, four buildings were razed including a double-storey building owned by Ansar Ahmed Malik, a doctor who lives in Shaheen Bagh. The other three were under construction.

Dr Malik, who runs a hospital in South Delhi’s Aya Nagar, said he wasn’t in Delhi when his family here told him that the building had been razed. “We had started constructing the building about a year ago and stopped the work after two floors were built. We were going to open a hospital there. Equipment has also been bought and kept on the ground floor. All of it has been destroyed too,” he alleged. “I did not get any notice from MCD,” he added.

A five-storey building which was also demolished was owned by Saif Mehboob (30), a resident of Batla House, who had started constructing the building in January 2021. “This is a political move. Why has nothing happened here for so many years when all these buildings were being built and people were moving in?” he asked, adding that he got no official notice before the demolition.

The third building, a two-storey structure, which was being constructed for over a year belonged to Mustakeem, a resident of Shaheen Bagh and native of Uttar Pradesh. “He is not in Delhi. He runs a plastic board business in Kanchan Kunj. No notice was issued to him,” the relative said.

Wasim Ahmad, another building owner, said he legally purchased the land and built the structure. He said that if the building was illegal why did the authorities not come to stop construction work? “I have purchased the land at ₹35,000 per sq yard rate. Construction had been going on for the past eight months. And suddenly they have decided to demolish it without even issuing a notice,” he added.

The demolition drives not only impacted those whose buildings had been razed but also 35-year-old Amina Bano who is seven months pregnant and lives in a rented house adjacent to Dr Malik’s building. During the demolition drive, debris fell on her house damaging her bed, washing machine, air cooler and ration.

“My husband wasn’t at home and my four children were in the room. I asked the officials to let me collect my things but they didn’t allow it and said that they would beat me with sticks if I didn’t leave. Therefore, I left with my children,” she said.

Deputy commissioner of police Esha Pandey denied the use of lathis during the demolition drive.

Amina saw her belongings crushed under the debris in front of her own house. “Where will my children sleep now? After saving rupee by rupee, we bought these items and now they’re all gone. Who will compensate for this?” she cried.

The demolition left many residents fearing action against their houses too.

Danista, 25, said she has lived with her family in the area for several years. She said her husband drives an auto-rickshaw. “I was scared to see so many policemen and bulldozers. Where will we go if they raze our house,” she said.

Rabia (32) who lives on rent in the area said, “We will have to shift on the road if they demolish these houses. It’s tough for us poor to afford houses elsewhere”.

Rohingya refugees also live in the area, though their dwellings were not targeted on Thursday. Delhi BJP chief Adesh Gupta has been demanding action against Rohingya and Bangladeshi immigrants ever since communal clashes took place in Jahangirpuri last month.

Sabber Kyaw Min, director of Rohingya Human Rights Initiative, a body of refugees, said that the talks about demolition drives and political rhetoric has increased the harassment of Rohingya who are UNHCR recognised refugees holding refugee cards. “Rohingyas are ‘sharnarthi’. India has a rich tradition of helping refugees. In Delhi, there are just 1,200 Rohingya. Where will they live, if their shanties are demolished,” he added.