Protein-packed insects might be the food of the future 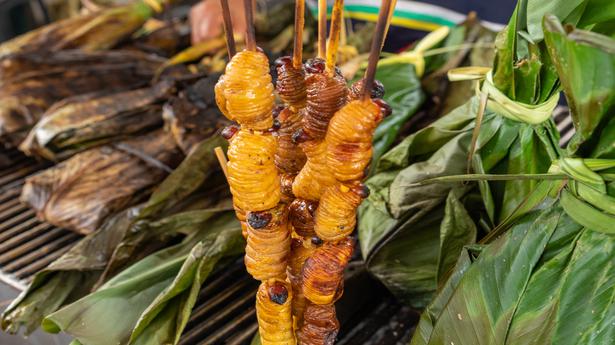 I still remember the outcry a friend sparked at a get-together at our place after his return from Southeast Asia several years ago. He’d come bearing gifts: various kinds of fried insects. I can’t recall a party ending that soon.

For those party poopers — and others who can’t stand the thought of fried cricket (it’s pleasantly crunchy, I must say) — I have just one suggestion. Do read  Extreme Cuisine: The Weird & Wonderful Foods That People Eat by Jerry Hopkins.

The foreword by the late chef, Anthony Bourdain, gives you an idea about the book. He writes that before he set out to film his food shows, he consulted this “definitive collection” of unusual eats, to see what he’d eat where. “Vietnam? Gotta have that ho bit long (half-term fetal duck egg). Singapore? Don’t miss out on the scorpions! After a few years of this, when offered a spicy fry-up of crickets or worms, I’m likely to say, ‘Bugs? That is so last week!’”

Fly on the plate

I can go on, but you get the gist.

Jerry tells us the story of a 19th century English gentleman called Francis Trevelyan Buckland. Raised by “eccentric and imaginative parents”, he had, as a child, eaten dog, crocodile and garden snails. “To a fellow undergraduate at Oxford he confessed that earwigs were ‘horribly bitter’, although the worst-tasting thing was the mole, until he ate a bluebottle fly.” Later, he writes, guests at his London home were served panther, elephant trunk soup and roast giraffe. “…and it was reliably reported that whenever an animal died at the London Zoo, the curator called the Buckland home.”

Jerry writes that he has tried to make the book a guide to how and why the other half dines. He is no Frank Buckland, he says, but he has tried out a wide variety of regional specialities — “from steamed water beetles, fried grasshoppers and ants, to sparrow, bison and crocodile, the latter three served en casserole, grilled, and in a curry, respectively.”

One man’s meat may well be another’s poison, but the point is that different kinds of food are eaten across the world, and for hundreds of communities, insects and such-like are important sources of protein. I remind my seafood-loving but insect-hating friends that there are many who liken eating shrimps to biting into insects. As Jonathan Swift said, “He was a bold man who first swallowed an oyster.”

Jerry points out that of the over 800,000 insect species identified, thousands are a part of the human diet. “Some of the more important groups include grasshoppers, beetle grubs and adults, ants and termites, moth and butterfly larvae and pupae, crickets and cicadas, bees and wasps, and flies…”

People in Thailand, he adds, fix a “zesty hot-pepper sauce” with ground-up water bugs, while in Cameroon, “a dish for special guests is palm grubs with salt, pepper and onion, cooked slowly inside a coconut.”

Food habits change over time, caused by supply and demand (and environmental concerns). “Sometime in the future, the aversion to eating insects in the developed world may change,” he adds. He cites a 1992 piece by Dr. Gene DeFoliart, a former editor of  The Food Insects Newsletter, where he writes about the implications of insects getting wide acceptance as a “respectable” food item in the industrial countries: there will be a whole new class of made-to-order for low-input small-business and small-farm productions and an increase in global trade in edible insects.

“And, by the way, guess which insect gets mentioned most often as the protein source of the future?” Hopkins asks. “Get ready. It’s the cockroach.”

Rahul Verma likes reading and writing about food as much as he does cooking and eating it. Well, almost

India is official country of honour at 2022 Marche du Film aka Cannes Film Market. What does it mean?