More
HomeSPORTSSPORTSOne-fourth of the world's uterine cancer is here, 73% of women do...
SPORTS

One-fourth of the world’s uterine cancer is here, 73% of women do not know; Threat to male private part too. Cervical Cancer Vaccine Cervavac; Symptoms, Treatment | Reasons

Green can enter as a batsman in the first Test, said Gilchrist

January is called the month of Cervical Cancer Awareness. Every 2 minutes in the world, 1 woman loses her life due to cervical cancer. After breast cancer, this is the second cancer in India which is the enemy of women.

Cervical cancer is cancer of the mouth of the uterus which is caused by a virus. It can spread through physical contact. This cancer is so deadly for women that the government has decided to give its free vaccine to all the school girls of the country. The indigenous vaccine named CERVAVAC has been prepared by the Serum Institute of India. Home Minister Amit Shah launched this vaccine on Tuesday.

This is a one shot vaccine, which means it will be administered to girls aged 9 to 14 in one go. Till now the vaccines that are being used in India to avoid cervical cancer are all foreign and they take 2 doses. CERVAVAC vaccine will be available free of cost in the school, but it will cost 200 to 400 rupees in the market.

The decision was taken on the advice of the government panel National Technical Advisory Group of Immunization (NTAGI). The vaccination drive in schools will be run under the Universal Immunization Program (UIP). If the HPV vaccine is used in teenage, then the chances of getting cervical cancer are very less.

First of all, what is cervical cancer?

According to Gynecologist Dr Ruma Satwik at Sir Gangaram Hospital, Delhi, cervical cancer is cancer of the cervix. It is the lower part of the uterus which is attached to the private part. This cancer is caused by Human Papillomavirus (HPV). This virus enters the body by making a relationship, that is, it is a sexually transmitted disease (STD) that takes the form of cancer.

Before proceeding further, know the symptoms of cervical cancer through graphic:

Girls of 9 to 14 years should get this vaccine

Cervical cancer is spread by the human papilloma virus, so the HPV vaccine is used to prevent it.

Dr. Ruma Satvik said that to avoid this disease, HPV vaccine is given to girls in teenage itself.

The right age to apply it is 9 to 14 years. This is because the child is not sexually active at that time. Since cervical cancer is caused by making a relationship, girls should be given its dose at an early age, so that in future they do not get any unwanted virus from their partner. Even if found, it should not have any effect on the cervix. Every parent should get this vaccine for their child.

There are 2 vaccines available in India since 2008 namely Gardasil and Cervarix. Its one dose starts from 3 thousand rupees and comes up to 10 rupees.

Women till the age of 45 can get dose

Dr. Suneet Kaur Malhotra, Gynecologist at Max Super Specialty Hospital, Delhi, told that women up to the age of 45 in India can get this vaccine, but along with the vaccine, it is also advised to have a Pap smear test. If cancer is detected in the Pap smear test, then this vaccine is not applied.

Married women also get vaccinated, protection from many infections

Dr. Ruma Satvik says that sexually active women are also given a dose of this vaccine. In fact, doctors usually assume that a woman has only one sexual partner in her entire life. Therefore, the risk of sexually transmitted infection is zero in them, but it is not necessary that the woman has HPV infection. If she has any other infection, then this vaccine is still effective and the fear of cervical cancer also goes away.

See in the graphics how many doses of HPV vaccine are used: 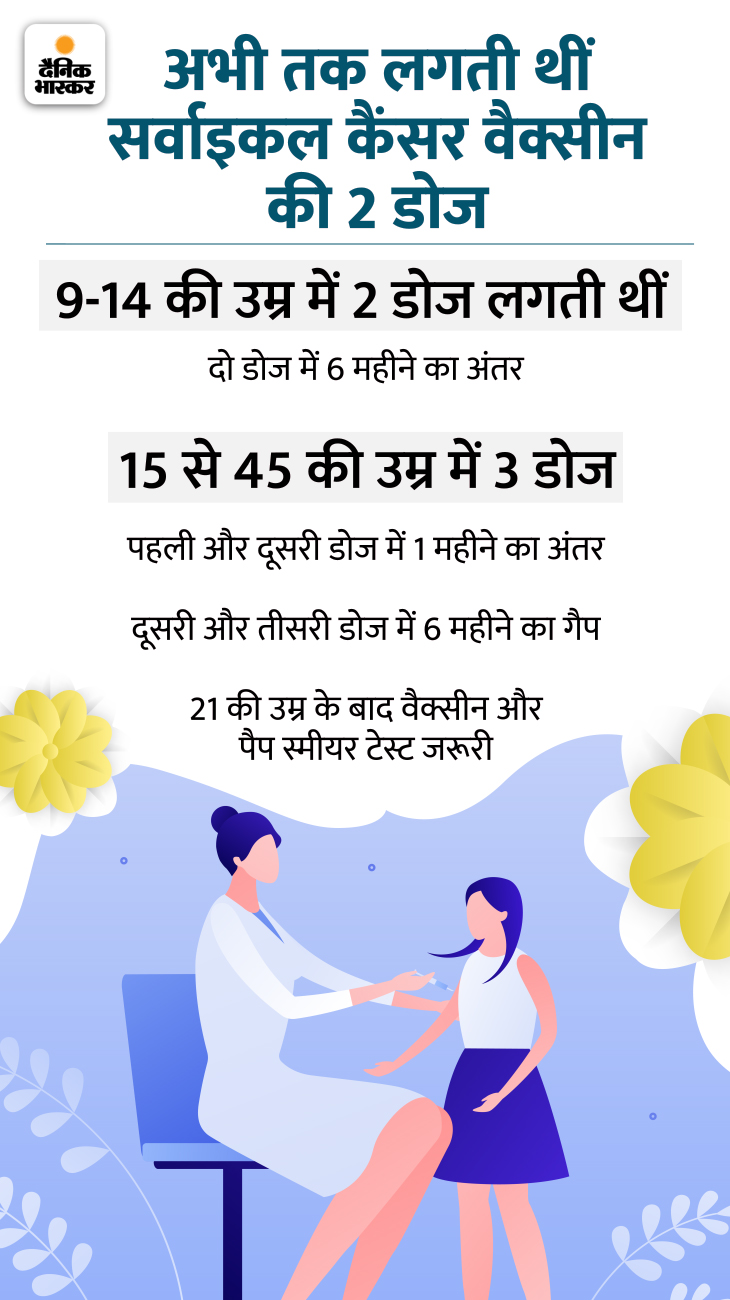 Symptoms of severe pain and bleeding cervical cancer during intercourse

There are many types of HPV virus. But it is not necessary that every HPV virus causes cancer. High risk viruses like HPV 16, 18, 6 and 11 are responsible for cervical cancer. There are no symptoms in the early stages of cervical cancer, but as it progresses, there is a lot of pain and bleeding after having sex.

According to Gynecologist Ruma Satwik, HPV has been seen in 50 to 80% of sexually active women. In most cases, this happens only when a woman has had more than one sex partner, has only one partner but has a sexually transmitted infection, or has a male partner with more than one woman. Apart from this, if a woman smokes or her immunity is weak, then she can fall prey to this infection.

Not every HPV-positive woman gets cancer. It largely depends on the immunity of the body. If a woman’s immune system is good, then the chances of getting cancer are less. 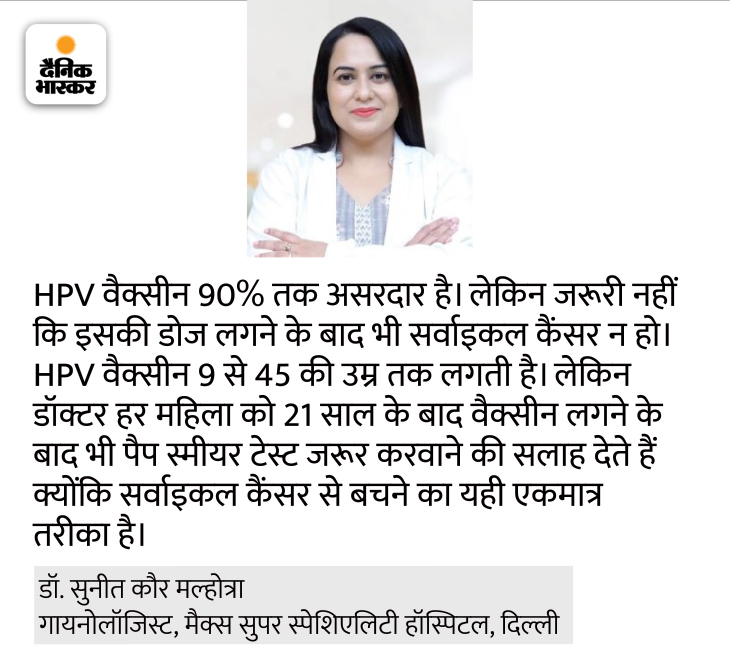 Virus can also be found from a partner

Dr. Suneet Kaur says that cervical cancer is not genetic. It is the only cancer that can be detected early in a Pap smear test and can be completely cured with surgery.

In pre cancer detection, the part of the body which is affected is removed. If the cancer is in the early stage, then the uterus is removed. Radiotherapy is done if the cancer has reached stage 2B. As the stage progresses, its treatment becomes difficult. That’s why pap smear test is necessary along with HPV vaccine.

According to Dr. Suneet Kaur Malhotra, the HPV vaccine is completely safe. But despite this, it is necessary to have a Pap smear test. Through this test, the cervix is ​​examined and cancer is detected. Pap smear test is recommended once in 3 years till the age of 21- 30 years and then once in 5 years.

Know through graphics how cervical cancer is screened: 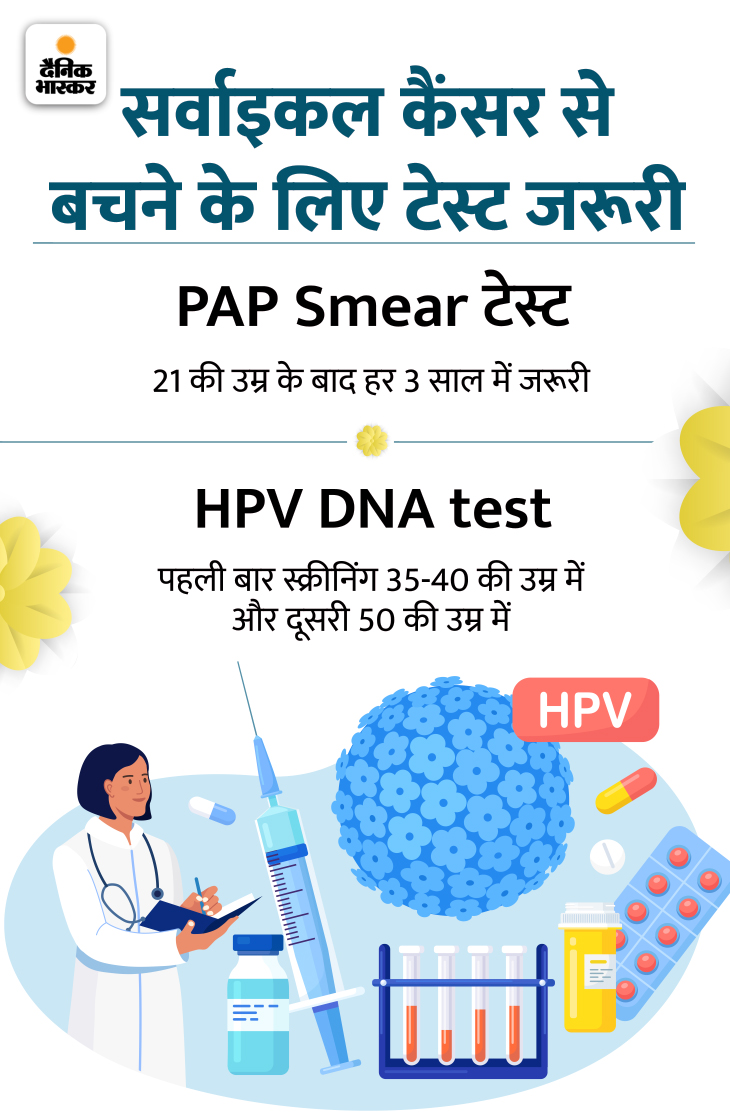 Vaccine is expensive so people are still away

The process of applying HPV vaccine has started in India only a few years ago. According to Dr. Suneet Kaur Malhotra, people came to know about it only because of the marketing of the vaccine.

This vaccine is very old which is being administered to girls abroad. In India, the HPV vaccine has now been included in the Indian Immunization i.e. Indian Vaccination Scheme. Now those who ask about it, they definitely get vaccinated. But it is limited only to upper middle class or above society. The main reason for this is its cost. Because of the high cost of the HPV vaccine, people avoid getting it. 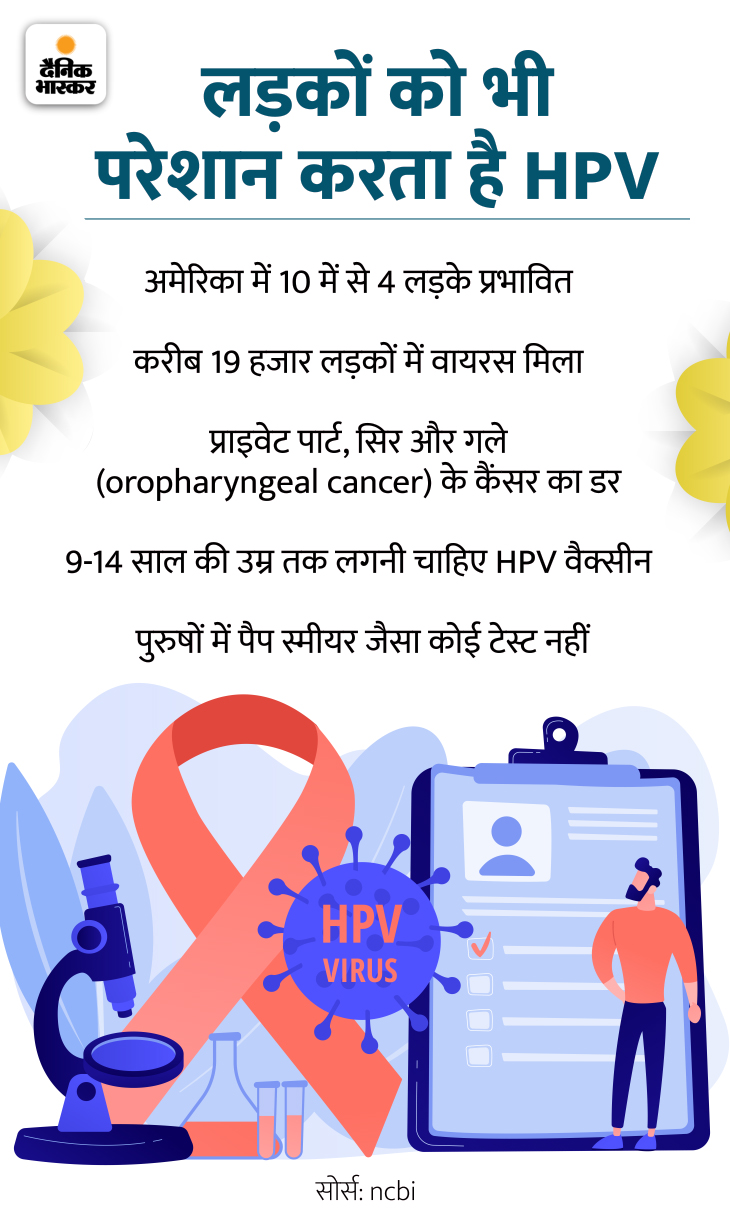 Delhi, Punjab and Sikkim are already getting free vaccine

State Governments in India are getting HPV vaccine applied to girls in school at their level. This campaign was first started in 2016 by the Delhi government. Its dose was given free of cost to girl students up to class 6. From 2016 to 2020, 13 thousand girls in the age group of 11 to 13 years were vaccinated.

But in February 2022, a newspaper published the news of 8000 HPV vaccines getting spoiled in Delhi because girls and their parents showed any interest in it.

In 2017, in Punjab and in 2018 in Sikkim, the introduction of this vaccine started in schools under the Public Health Program. The good news is that Sikkim is the only state where 95% of girls are vaccinated with the HPV vaccine.

This vaccine is given free of cost to girls aged 11 to 13 at Dilshad Garden and Janakpuri Center of Delhi State Cancer Institute.

Many people are confused between cervical cancer and cervical in the neck. 73% women neither had correct information about this cancer, nor did they ever get pap smear test done nor heard about the vaccine or got it applied. It was revealed in the survey that only 21% women have got HPV vaccine.

Because of being sexually transmitted, there is no talk in the society

Mathangi Ramakrishnan, head of CAPED India’s communication and program strategy, said that there is no talk about this virus and vaccine because there is no awareness among people.

Some people know about it but do not talk because it is a sexually transmitted infection. Those who know about it and are parents, they are uncomfortable talking about it to their children.

Many parents feel that their children do not need the HPV vaccine because they are not sexually active. Some are also afraid that if their children get this vaccine, they may not start building relationships.

Gynecologists and pediatricians in the country themselves do not recommend people to take the HPV vaccine, whereas doctors should insist on the parents of girls and women to take this vaccine.

There are many myths about cervical cancer, read the graphics:

Every year 1.25 lakh new cases are found in India.

The report of the journal The Lancet revealed that in 2020, cervical cancer was found in 6,04,127 women worldwide. Of these, 21% of new cases and 23% of deaths were from India. India ranks fourth in the world in terms of cervical cancer.

According to the National Cancer Registry Program, 1.25 lakh new cases of cervical cancer are found every year in India. Due to this 67,477 women lose their lives. This cancer is more detected in women aged 55–59 years.

According to the report, 24.3% cases of cervical cancer in India per 1 lakh were found in Aizawl, Mizoram. This was followed by 19.5% from Barshi in Maharashtra and 18.9% from Bengaluru.

Daughter should not get unwanted virus from partner, so vaccine is necessary

The principal of a school told that it is important for parents to understand that in future their daughter does not get unwanted virus from her partner, she does not have to face serious disease like cervical cancer, hence HPV vaccine is very important. But parents are not able to think about it openly. Society desperately needs to talk about this topic.

To continuously receive such informative and knowledge-enhancing news, select ‘Women’ in ‘My Favorite Topics’ on the DB app or ‘Miss’ in Gender by going to Profile.