Marcos Jr & Sara Duterte | Back to the future for the Philippines 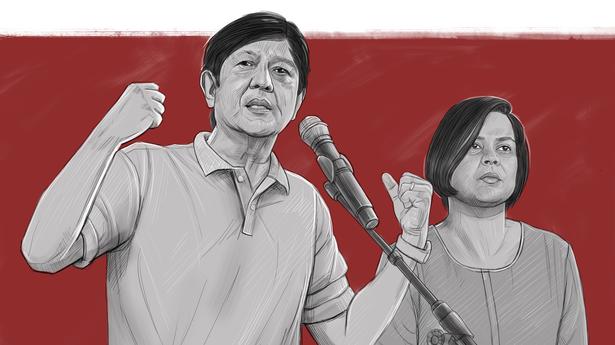 Thirty-six years after Ferdinand Marcos’s dictatorship was overthrown, his son, in an alliance with the
Duterte family, has been elected President

Thirty-six years after Ferdinand Marcos’s dictatorship was overthrown, his son, in an alliance with the
Duterte family, has been elected President

Visitors to the inner quarters of the Malacanan Palace, the grand complex on the banks of the Pasig river in Manila that serves as the official residence of the President of the Philippines, are usually taken to see two sights, without exception.

The first is an ornate hall in the inner chambers that is widely believed to be haunted. This is a belief so ingrained that it was reportedly one reason why several leaders, including current President Rodrigo Duterte, decided to not live in the palace, opting instead for another villa nearby.

The second is a small and nondescript balcony that overlooks the entrance of the Palace. The balcony in of itself is hardly noteworthy in the midst of the Malacanan’s grandeur. But for most Filipinos, it is instantly recognisable.

For two decades until 1986, the longest ever residents of Malacanan Palace, Ferdinand Marcos and his wife Imelda, would occasionally appear on the balcony, from where the former dictator would address rallies. Until, of course, he was overthrown by the People Power revolution, during which protesters stormed the grounds of the palace and saw for themselves the extraordinary luxury that the Marcoses lived in, fuelled by their unprecedented corruption. And now, 36 years later, another Marcos is back at the Malacanan.

On May 11, Ferdinand “Bongbong” Marcos Jr, the 64-year-old son of the former dictator, swept to power, capping a return for the once disgraced family. The return has long been in the works. The family, in a sense, has been working on it since almost as soon as they lost it, and after they were allowed to return to the country shortly after the death of Marcos in 1989.

Mr. Marcos Jr, six years ago, lost the Vice-Presidential election to Leni Robredo, a lawyer, economist and activist who was his opponent during this election. This time, having formed an alliance with President Duterte’s daughter Sara, he swept to power with a strong mandate, winning 31 million votes, more than double his rival’s.

For the people of the Philippines, there could not have been two more contrasting choices on offer at the polls.

The Marcos-Duterte axis between two entrenched political families openly championed hardline politics. President Rodrigo Duterte’s term was defined by his sweeping anti-drug crackdown that claimed thousands of lives and alarmed human rights groups, but proved popular among many others. The Marcos-Duterte campaign also sought to whitewash the legacy of Ferdinand Marcos, downplaying the atrocities committed by his regime while portraying his two-decade rule as an imagined golden era of economic prosperity, no matter that the Marcos years were marked by growing poverty. Leni Robredo’s “pink revolution”, on the other hand, cautioned against a return to authoritarianism and was deeply critical of President Duterte’s war on drugs and rights violations.

The strong political bases of the Marcoses and Dutertes, however, formed an unassailable coalition. Political analysts told local channel ABS-CBN that a combination of “Duterte’s popularity and Filipinos’ regionalism”, with the Marcos base in the north and Duterte’s in the south, brought them the votes, showing that “regionalism still forms a large part of how Filipinos vote”.

They were also powered by a huge social media campaign, one that was not averse to dirty tricks. For a young population, the campaign completely rewrote the history of Ferdinand Marcos. The independent media outlet Rappler, founded by journalist and Nobel laureate Maria Ressa, analysed Facebook posts over the past five months and found that the Marcos base and network routinely spread false claims about the elections. “This is the problem with social media: It has allowed propaganda to flourish and literally has allowed public figures like Marcos, like Bolsonaro [in Brazil] to ignore [media] checks and balances… and to create their own realities,” Ms. Ressa told Agence-France Presse this week. “That’s not a good thing.”

Mr. Marcos Jr has appointed Ms. Sara Duterte as head of education, leading to concerns that there will now be an official sanction to the rewriting of history that the Marcos-Duterte campaign carried out. Mr. Marcos Jr and Ms. Sara Duterte will not be the only representatives of their political families in positions of power. Ferdinand Martin Romualdez, a cousin of Mr. Marcos Jr, has been appointed as House Speaker. Mr. Marcos Jr.’s son Sandro was elected as a representative to the House after winning a seat in their northern bastion, while President Duterte’s son, Sebastian, will succeed his sister Sara as Mayor of Davao city, a post their father once held.

The biggest question mark is how Mr. Marcos Jr plans to govern. He has been short on details during his campaign and largely avoided engaging with the media. Having won, he has pledged to govern with “unity”.

The victory holds a broader significance. It has underlined both the power of nostalgia for an electorate — the campaign rested on harking back to an imagined time of prosperity — as well as how a strong narrative can trump detail. The real test, however, begins now for the Marcos-Duterte combine, starting with reviving the economy and ensuring that investors, who were thought to widely favour Ms. Leni Robredo, do not leave the country.

With two political dynasties at the helm — and signs that Mr. Marcos Jr intends to continue President Duterte’s approach of spending big on infrastructure as a means to grow the economy and courting investments from China, regardless of unresolved tensions over the South China Sea dispute — some newspapers pointed to the current crisis in Sri Lanka as a warning sign.

“The new administration in the Philippines should take care not to make the same mistakes as Sri Lanka’s leaders, given that there are similar circumstances here: an inordinate amount of clan dominance in politics, economic circumstances that tempt unwise quick-fix solutions, such as subsidies and price controls, and considerable business entanglements with China,” the Manila Times said. “None of these things necessarily have to lead to the same kind of trouble, but without diligent effort on the leadership’s part, they very well could.”

Meanwhile, those who still remember the Marcos years are hoping history won’t repeat itself, and that the institutions that are a legacy of the movement that deposed him 36 years ago, will stand firm as his son comes to power.

“I was with the millions at People Power and do not relish a Marcos Jr. presidency,” observed historian Filomeno V. Aguilar Jr. in a column for Rappler. “Even Ferdinand Marcos Jr. is a beneficiary of the People Power Constitution, which allowed him to run and win. Marcos’s election win does not obliterate People Power but is a recognition of it, even if burying the ghosts of 1986 might have been his intention.”

Marcos Jr., six years ago, lost the Vice-Presidential election to Leni Robredo, a lawyer and activist who was his opponent during this election

This time, having formed an alliance with Sara Duterte, he swept to power with a strong mandate, winning 31 million votes, more than double his rival’s

Marcos Jr.’s son Sandro was elected to the House, while President Duterte’s son, Sebastian, will succeed his sister as Mayor of Davao city

After Meeting Nadda, BJP’s Arjun Singh Says Decision to Stay or Leave Party Will be Clear in ‘Next 15 Days’

Action Will Be Taken Against Guilty Irrespective of Party, Says Maha Home Minister