‘I want to change the image of JNU. It is a nationalistic university’ 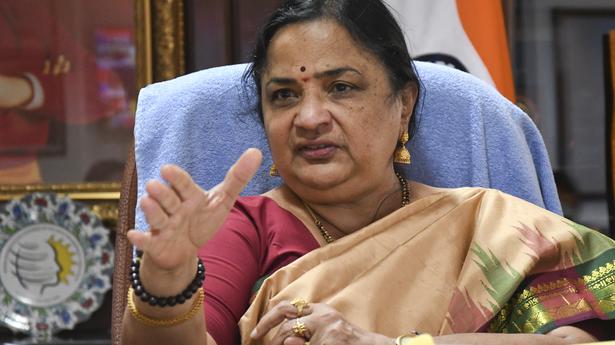 JNU Vice-Chancellor says it’s extremely unfortunate that debate today is not intellectual but physical, which is not good for any varsity

JNU Vice-Chancellor says it’s extremely unfortunate that debate today is not intellectual but physical, which is not good for any varsity

Jawaharlal Nehru University Vice-Chancellor Santishree Dhulipudi Pandit, who took charge in February this year, says the university is not looking to start new schools but to consolidate the strengths of the existing ones. Talking to The Hindu, she said the plans to start a medical college and hospital have been shelved and the university is making efforts to provide infrastructure to its School of Engineering and School of Management that were started without basic infrastructure. Excerpts:

It has been over three months since you returned to your alma mater as Vice-Chancellor. In what way do you think the university has changed? What needs to be changed?

It has been wonderful to come back to an institute that helped me grow. JNU gave me an all-India viewpoint when I came here from Tamil Nadu and it opened up the world to me. What has changed is that when I was a student, irrespective of what the major viewpoint was, the debate used to be very academic and constructive. It was in the form of speeches and pamphlets. There was no violence. I find it extremely unfortunate that the debate today is not intellectual and has become physical, which is not good for any university.

This entire debate questioning JNU’s nationalism that has come up over the last six years has hurt me a lot because JNU is a nationalistic university.

I do not believe in representing any viewpoint. I believe that I represent JNU and all students here are equal. We can politically disagree and agree to disagree, but at the level of a human being we can still be very good friends. This is what JNU taught me during my student days.

Another thing that has changed is that back then when I was a student, JNU was not so crowded. We were only 3,000 students at that time and now we are 9,000-10,000 students. It has grown quite a bit, which has thrown up many challenges.

Do you think the university is facing an image crisis?

I want to change the image of JNU because what is being projected is not the reality. You can’t judge a university from a 5% lunatic fringe. The majority of the students here have come from marginalised backgrounds looking to make a career, so this stereotyping hurts not only the university but the students as well. We are the topmost university not only in the country but also around the world in many fields. The perception is changing; people outside the university have understood that students of JNU don’t only protest, throw stones, fight and raise anti-national slogans. We are a place for academics and research where there can be differences of opinion. I respect dissent, difference, diversity, democracy and development. An important message I want to give to all students is that we are all JNUites and we are human and should not spread hatred due to difference of opinion.

There is a need to revamp a lot of the infrastructure at the university, which is crumbling, as well as build hostels for the growing number of students. There are many green laws that do not permit construction on the campus. How is JNU trying to accommodate so many students?

We are not going to start any new schools or plan expansion during my tenure. During the last Vice-Chancellor’s tenure, many new schools were started and we are now having issues because we opened them without having the infrastructure and the faculty. We need to first resolve those issues and consolidate ourselves. Even in areas where we were given the approval to build by the DDA in 2010, we have not been able to start projects and will start doing so soon. The Higher Education Financing Agency loan will help us build and we are bringing in private philanthropy to update our labs. We are also planning to redo our classrooms and bring in state-of-the-art hybrid classrooms where a teacher can teach an audience outside JNU as well. It will help us expand not on campus but reach out to rural India. For the classrooms as well, we are looking at private philanthropy. We have not received any contribution from our alumni yet to fund developmental projects and the funds we get from the Central government are limited.

JNU had announced a plan to start a 500-bed hospital and medical college. What is the status of that plan?

That plan has been shelved for now because we don’t have the space and also it needs a lot of funding. Even the engineering and management schools have had a lot of teething problems. JNU is a brand name and I don’t want to do anything just because it has to be done. Our management school needs to compete with an IIM and we need to have a faculty of the same calibre and offer students placements. Same is the case with the engineering school, we don’t have a building, we don’t have labs. It is criminal to start schools without facilities being in place first. We can’t take differential fees from students and then offer them the same facilities as other students. If we cannot offer the students half of what IIT provides, we are failing the students. What has already begun, we can’t close them down, so we are looking how to strengthen them.

What are the other growth plans?

Apart from IITs, JNU is the only other university for which there’s a demand for offshore campuses.  This shows that we are recognised all over the world. Many African nations have shown interest in JNU starting offshore campuses in the field of social sciences, international relations and languages. We are looking at how to consolidate our strengths and build on infrastructure, get better faculty and update our programmes. We are looking to offer joint degrees as the NEP has introduced the academic bank of credit. When it comes to international relations and languages, we have huge funding coming in from the European Union as well as  Korea, Taiwan, Spain and Malaysia. We also want to be the digital hub of knowledge so we are strengthening our e-learning offerings.

First-year students, who are attending online classes, have been demanding immediate allotment of hostels. What steps are being taken to accommodate them?

UGC has been giving extensions to PhD students and around 200 PhD students from JNU have sent an appeal that they want extension. How can I then throw them out of hostels and allot rooms to new students. That will create another problem, so we are looking at ways to get the first-year students, who are online, back on campus. We only have two new hostels. One is Barak, which is for northeastern students that has been funded by the Ministry of northeast affairs that will be inaugurated in a month. The other is Shipra-II, which will cater to the rising number of women students on the campus.

Are there any plans to reinstate the Gender Sensitisation Committee Against Sexual Harassment (GSCASH), which was replaced by the Internal Complaints Committee? There has been a huge demand from students as they feel that the GSCASH was more effective.

We have to go as per the guidelines set by the UGC. But I agree there are many professors who are misogynistic and self-confessed molesters and they have to be brought to book as the student is always the victim as it is an unequal relationship. Any woman student who comes and complains has a lot of courage, so we are looking into how we can work on strengthening the redress mechanism. I would rather believe a student than a faculty because I don’t think someone will come and lie on such an issue. I am trying to make people more sensitive, sympathetic and empathetic. I am also telling them that it is not only the girls who need to be counselled, the men have to be counselled. No faculty has been punished yet. I think if we punish one, it will send out a clear message that such behaviour won’t be tolerated. We are also going to get a new security agency on campus, which will be more gender-sensitive.

BMW i4 electric sedan India launch on 26 May: All you need to know