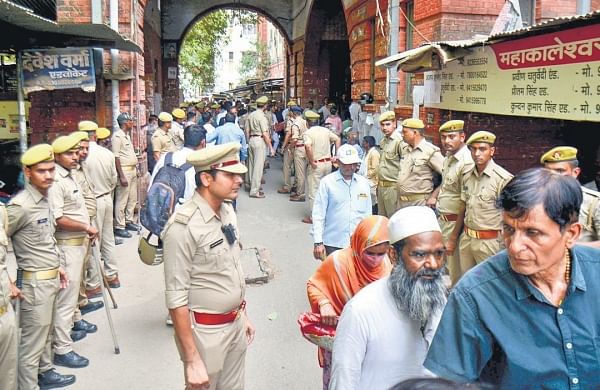 VARANASI: The Gyanvapi mosque management committee may move the High Court against the local court’s order over the videography survey of the premises that is expected to begin on Saturday.

A counsel for the mosque panel said the court’s decision delivered on Thursday is not final and it may be challenged in the High Court.

“We have four days to challenge this order. We can challenge the order in the High Court after consultation,” advocate Abhay Nath Yadav said.

The Varanasi court had on Thursday rejected a plea to replace the advocate commissioner it had appointed for conducting the videography survey of the Gyanvapi-Shringar Gauri complex here and ordered the completion of the task by May 17.

The district court also appointed two more lawyers to help the advocate commissioner carry out the survey at the mosque, which is located close to the iconic Kashi Vishwanath temple.

When asked about the hearing on the plea challenging the survey in the Supreme Court earlier in the day, the advocate said he does not know much about it.

The Supreme Court on Friday refused to grant an interim order of status quo on the survey. The top court, however, agreed to consider listing the plea of a Muslim party against the survey.

“As far as the Gyanvapi mosque management committee is concerned, we are contemplating to approach the High Court against the previous day’s order of the Varanasi court,” its counsel said.

Advocate Madan Mohan Yadav, who is appearing for the Hindu side, said on Friday said the survey may start on Saturday.

“Today, the entire survey team will hold consultation among themselves and possibly start the work from Saturday,” he said.

He said the three court-appointed advocate commissioners, five lawyers each from both sides and an assistant besides a videography team will carry out the survey.

The Varanasi court on Thursday rejected the plea to change the court-appointed advocate commissioner to conduct the survey and appointed two more commissioners to assist him in the work.

In the matter relating to the opening of two basements in the Gyanvapi complex for videography, the court said locks should be broken for carrying out the survey if the keys are not available.

Partly cloudy sky, thunder on forecast in Delhi; heatwave to return from tomorrow

The Congress’s inexplicable lethargy over the presidential poll