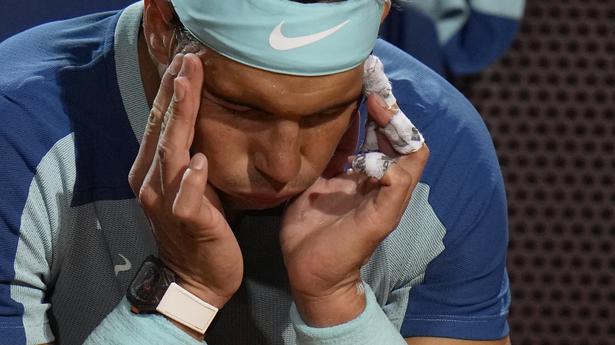 Nadal had a solid start, but the 35-year-old struggled physically towards the end of the contest, raising doubts over his fitness ahead of the French Open, which he has won a record 13 times.

The Spaniard, who has endured a string of injuries during a career spanning more than two decades, dominated the opening set with his brilliant return of serves.

🚨 Upset Aleeeert 🚨 @denis_shapo fights back from one set down and takes out the 10time champion Nadal! 👊🏻

Canadian Shapovalov responded in style by racing to a 4-1 lead in the second set with his energetic and attacking play, but Rafael Nadal got back into the contest by winning the next three games.

Nadal saved a set point at 4-5 but a series of unforced errors and lack of aggression from him saw the match go into the deciding third set.

World number four Rafael Nadal broke through right away at the start of the decider but later limped with an apparent foot injury, likely related to his chronic left-foot problem.

Shapovalov won 17 of the last 20 points, completing his comeback as he handed Rafael Nadal his earliest Rome exit since 2008.

‘I am a player living with an injury’: Rafael Nadal

Rafael Nadal later said that everyday training was a challenge and he would take a doctor with him to Roland Garros.

“I had my foot again with a lot of pain. I am a player living with an injury – it is nothing new. It’s something that is there,” Rafael Nadal, a 10-times champion in Rome, told reporters. “Unfortunately, my day-by-day is difficult, honestly. Even like this, I am trying hard… it can be frustrating that a lot of days I can’t practice the proper way.”

The 35-year-old missed the bulk of last season due to the foot problem before mounting a remarkable comeback to win the Australian Open in January and also prevailing in Acapulco.

“Since I came back, the foot has been tough,” added the Spaniard. “Negative thing and toughest thing for me today is honestly I started to feel myself play much better. I started the match playing much better.”

Rafael Nadal’s preparation heading into the French Open has been far from ideal after he was also knocked out of last week’s Madrid Open by Carlos Alcaraz at the quarter-finals stage.

“First thing that I need to do is to don’t have pain to practice… it’s true that during the French Open, Roland Garros, I going to have my doctor there with me. That sometimes helps because you can do things,” said Nadal. “In the positive days and in the negative days, you need to stay and to value all the things that happened to me in a positive way.”

Earlier, Novak Djokovic ended Stan Wawrinka’s hopes of stringing together a hat-trick of match wins for the first time in 18 months with a 6-2 6-2 thumping.

The 37-year-old Swiss, who had not played for 12 months after undergoing two surgeries for a foot injury, battled past Reilly Opelka and Laslo Djere to set up a 26th meeting with top seed Djokovic in the Italian capital, and first since 2019.

The 361st ranked Wawrinka, who last won three successive matches at the 2020 Paris Masters, could not cope with Djokovic’s baseline intensity in the first set and was broken twice.

Wawrinka showed incredible defence to break Djokovic in the sixth game of the second set but a double break from the world number one carried him to victory.

It was Djokovic’s 20th win over Wawrinka, and 998th career victory, as he bids to become the fifth player to reach the 1000-win mark.

“It is great to see Stan back,” the Serbian said. “He won two matches here, he is still physically not there, but he is still Stan and can hurt you.

“From the beginning I really moved him around the court and held my serve well. I know what is expected from me next.”

Alexander Zverev chalked up a century of match wins at Masters 1000 events with a 6-3 7-6(5) win over Australian Alex de Minaur, while world number five Stefanos Tsitsipas battled back from a set down to beat 4-6 6-0 6-3 Russian Karen Khachanov.