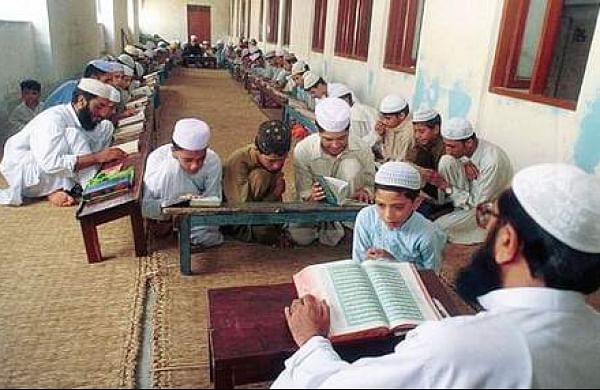 CHANDIGARH: Haryana may make singing the national anthem mandatory in all madrassas in the state, Education Minister Kanwar Pal indicated here on Friday, a day after neighbouring Uttar Pradesh made it compulsory.

“There is no harm. The national anthem should be sung everywhere, be it a madrassa or a school. Nobody should have any objection,” the minister said when asked by reporters to comment on the UP government’s move and if Haryana was contemplating a similar step.

Singing of the national anthem has been made compulsory at all madrassas in Uttar Pradesh starting Thursday.

The Registrar of the Uttar Pradesh Madrassa Education Board issued an order to this effect to all the District Minority Welfare Officers on May 9.

Kanwar Pal was also asked to comment on Congress leader Randeep Singh Surjewala demanding on Wednesday that the Haryana government withdraw a new Class 9 history book that mentions the Congress’ “policy of appeasement” as one of the reasons for the country’s Partition in 1947.

“You cannot make history sugar-coated. When the book gives credit to Congress on many things, mistakes will also be highlighted. Accepting partition of the country was a mistake and that will find a mention,” he said.

Responding to a question, the education minister said lessons on freedom fighter and Hindutva ideologue Veer Savarkar were being taught in schools earlier and that will continue.

Young generation is being given correct information about history, he said.

He said great men in their own way contributed significantly to liberate the country from the British.

“These are the events that happened in history and the younger generation is being made aware of them,” he said.

Meanwhile, he also said there is a lot of enthusiasm among the people regarding the Pragati Rally to be organised in Yamunanagar on May 15.

He said Chief Minister Manohar Lal Khattar will dedicate development projects worth crores of rupees to the public in this rally.

Meanwhile, with singing of national anthem made compulsory in all madrassas in neighbouring Uttar Pradesh, Madhya Pradesh Home Minister Narottam Mishra on Friday said a similar step could be considered in the state.

He made the statement in response to a query asked by reporters here.

Singing of national anthem “Jana Gana Mana” has been made compulsory at all madrassas in Uttar Pradesh starting Thursday.

The Registrar of the Uttar Pradesh Madrassa Education Board issued an order to this effect to all the District Minority Welfare Officers on May 9.

Talking to reporters, minister Mishra said the national anthem should be sung everywhere.

“It is a good thing. It is a national anthem and it can be sung everywhere,” he said.

When asked whether a similar decision could be implemented in MP, Mishra said, “It is matter of consideration. It can be considered.”

We are just asking for educational institutions situated in Madhya Pradesh, Uttar Pradesh and all corners of the country to sing the national anthem and national song and slogans of ‘Bharat Mata Ki Jai’.”

“If such a thing is happening and such a decision has been taken, then it is a welcome step,” he said.

The national anthem was sung in madrassas across the state on Friday after it was made mandatory by the Uttar Pradesh government, according to reports.

Though the decision came into effect from Thursday, most madrassas in the state had remained closed due to low attendance of children on the first day of classes after the end of Ramzan holidays.

Friday is a holiday in most of the madrassas, but in those that were open, ‘Jana Gana Mana’ was sung as part of the morning prayers, the reports said.

“The government wants the students of madrassas to remember that legacy forever. When they sing the national anthem in the morning, the nation will be strengthened,” the state’s Minister of State for Minority Welfare Danish Azad Ansari told PTI.

“Its purpose is to further promote the feeling of patriotism among the children studying in madrasas,” he said, adding that madrassas played an important role in the country’s Independence.

According to reports received from the Muslim-dominated Saharanpur district, minority welfare officer Bharat Lal Gond said all the students and teachers in the madrassas that were opened sang the national anthem “with enthusiasm”.

In Badaun, ‘Jana Gana Mana’ was sung during the morning prayers, and teachers explained the national anthem’s importance to the children.

Gorakhpur district minority welfare officer Ashutosh Pandey said most of the 243 madrassas sang the national anthem along with the traditional prayers in the morning.

Diwan Sahab Zaman Khan, General Secretary of Teachers’ Association Madaris Arabia, said Hamd (praises to Allah) and Salam (salutations to Muhammad) used to be recited before the start of classes in madrassas until now.

“In some places, the national anthem was also sung but it was not compulsory. Now it is.”

After the singing of the national anthem was made compulsory at all madrassas in the state from Thursday, Registrar of the Uttar Pradesh Madrassa Education Board, SN Pandey, had issued an order to all the district minority welfare officers in this connection on May 9.

At present, there are 16,461 madrassas in Uttar Pradesh, out of which 560 receive grants from the government.