More
HomeSPORTSSPORTSAfter marriage, Anish kept meeting his girlfriend, but when he came to...
SPORTS

read on the appHosts India on Thursday thrashed...
SPORTS

Veena was stunned to see the evidence of the truth. She would have fallen had the ground been behind her instead of the sofa. Kept crying for hours sunk in the sofa. Surprised when the doorbell rang. As if you have heard the doorbell for the first time in your life. It took some time to regain consciousness. The kids are back from school! What will you tell the children? Won’t they ask why I have such puffy eyes and puffy face?

Sitting in front of Anish with the evidence, when it was a long time and Anish’s silence did not break, Veena got furious, “I only know how I have explained to the children that it is nothing but a headache. Don’t force me to speak in such a loud voice that it goes out of the room. While saying this, Veena again burst into tears.

Anish wanted to go ahead and handle her but stopped seeing the spark in her eyes, “First you control yourself then I will clean up.” At last he said, choking the spit with difficulty.

After all, the time of taking care was over and Anish started speaking.

“I knew Sheenu before marriage. She was my best friend. Slowly we came to know that we are falling in love. We wanted to get married too. But you already know that our family, relationships, such a big bungalow house, land, father’s accumulated business were only here, in Patna and I always knew and believed that growing up I would get to do father’s business. Just have to handle it. She got a job in Mumbai and she settled there. Neither she was ready to leave her job when there was talk of marriage, nor was my family ready to adopt a working girl.

“So that’s why you set up a unit of Papaji’s business in Mumbai?”

“Yes, that was the reason, but by then I had realized that my family members would not accept this marriage, so we rarely met. We used to walk together for hours together holding hands on the sea beach thinking of ways to persuade the family members.

Veena felt that an arrow had pierced her heart, the pain of which was becoming unbearable. ‘Holding hands’ she muttered angrily, “Why didn’t you tell your family that if you don’t marry her, you won’t marry anyone.” Veena’s voice became louder even without wanting to.

Anish came close to her, making a gesture of speaking softly. He lovingly tried to take Veena’s hand in his but Veena jerked away.

“I had done the same thing, but seeing you my faith was shaken. Your simplicity, your beauty and such a different and unique style. Do you know, Buaji had said with firm conviction that after seeing this girl, no one can refuse. And his words proved to be true. What is lacking in you? There was no deficiency in you. Had there been any other time, looking at myself with such loving and loving eyes, saying such things, Anish would have hugged Anish’s chest and planted a sweet kiss. In the past too, Anish has made it romantic by telling this on many evenings. Then he himself has fulfilled Anish’s demands by taking the initiative of love.

Seeing the happy glint of the past in Veena’s eyes, Anish gets a chance to get closer to her. He once again tried to hold Veena’s hand, but Veena held back, “How can you fall in love with someone else? And when you had already married me, why didn’t you break off relations with her?” His eyelids were filled again. “So much so that I also understand that the past can belong to anyone. If it was just the past, I would never have been so sad.”

“If we didn’t have any relations, would they have broken up? We used to meet as good friends whenever I was in Mumbai. But once I went to Mumbai, she was not there. His mother had died. So she had gone to her city. The day she came back, the next morning I had to leave for her return. So she came to meet me in my room. We kept on talking. It was rainy season. The rain that started that day was not taking the name of stopping. She was very sad. To dispel her sadness, I took her in my arms and stroked her back for consolation. Anish fell silent.

He kept looking at Veena for some time and then said, “In those days your first pregnancy was going on. I was very thirsty. Don’t know when and how my lips started kissing his. Don’t know when the rain outside started soaking our thirsty body and mind and the unfaithful weather made us fall in love. My palms from his shoulders as if on their own…”

“Stop. You are talking to your wife…” Veena screamed.

“Your son has turned thirteen. For thirteen years you me… no, I can’t live with a deceitful person like you… can’t live…” Veena fell on the bed and kept on crying.

A week has passed. Veena normalized herself and started talking again. In these days, Anish had also normalized himself. “You either have to close the Mumbai unit or I will accompany you whenever you go to Mumbai.”

“Both these things are not possible. Leaving home and children here alone, you…”

“Okay Veena. If this is your decision then it is right. Custody of the children, compensation will be whatever you want, but listen to me calmly for once.

Veena looked at Anish with hurt eyes. “Look, you believe that there is no fault of the children in this. They will definitely be broken by our divorce, you ask your parents and see, they and the society will blame you only. what will you do then Even if I give you all the expenses fixed by the court, will your expenses be covered in that amount? Will you be able to shape the growing children alone or will you be able to trust me by leaving them with me?

Veena got shocked. There was truth in Anish’s words, but now things were out of his reach. Now if she does not take divorce, then whatever Anish used to do secretly, now it will be like giving permission to do it openly. And if she gets divorced… Veena started feeling dizzy. 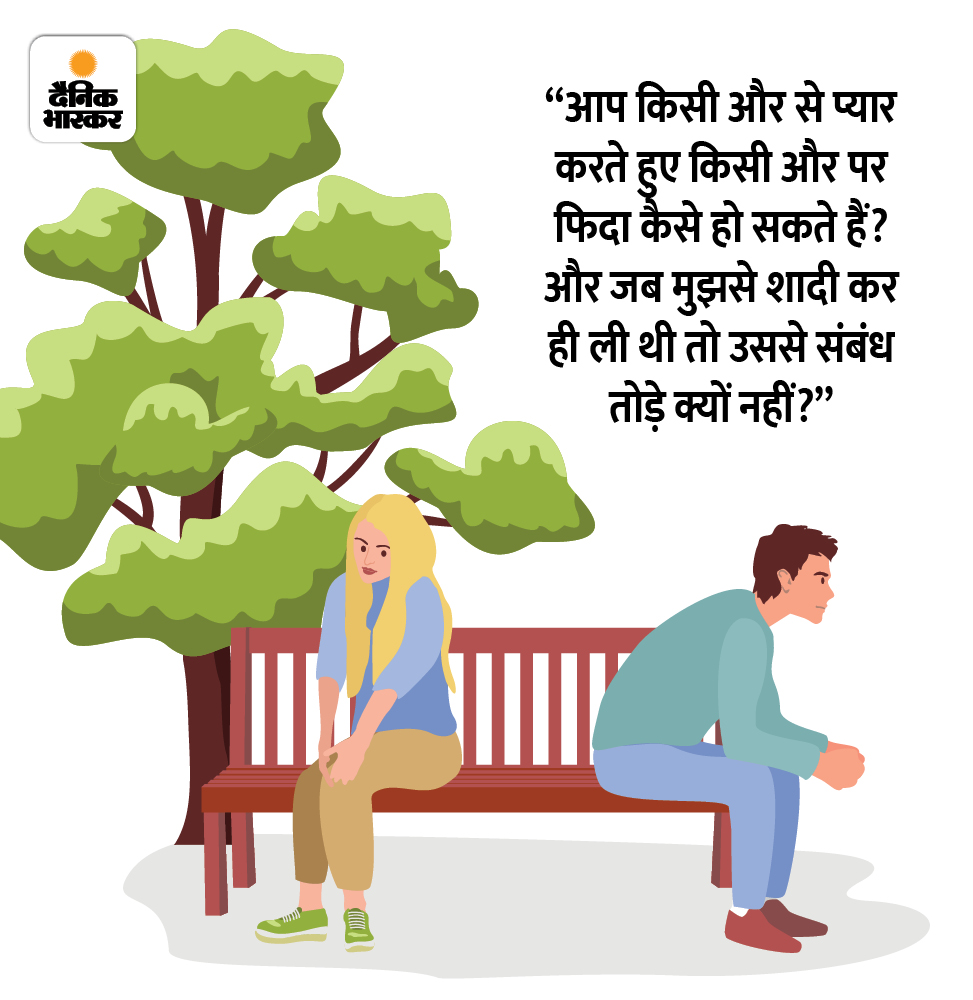 As soon as he got a chance, Anish held her in his arms and started writing the story of Anish’s kisses on her trembling body, “Believe me, I love you very much. My everything belongs to you and the children only. She is all alone. He has no one except me. I meet her only when I am in Mumbai. He doesn’t take anything away from you. When I come back, I don’t even bring her memories with me, true! Please forgive me for such infidelity.

Then Anish left for Mumbai. A few days before leaving, his love had increased a lot. But something else was going on in Veena’s mind.

When Anish came back, Veena was not in the house. Mother got food and according to her habit pampered etc. “Where is Veena?” After all, Anish spoke after getting tired of searching everywhere.

“She has joined a hobby course. Is there any computer course.

“Oh, is that so!” Anish heaved a sigh of relief.

Children came, there was laughter and games. What did father bring, as if pampered, talked, then he said, “It’s time for our tuition.”

“Our tuition sir is very good…” The daughter was singing his praises and Anish was watching how much has changed in fifteen days.

Veena came in the evening. Seeing him once, Anish could not recognize him. Chopped hair, new trendy suit and confident face. He was more surprised that how the mother…

Anish’s happiness knew no bounds at night seeing Veena in sexy nighty. “I am glad that you understood and accepted the need of the hour. I am very happy to see you happy. Anish had just wrapped her in his arms when she slowly got separated. “I want to tell you something.” Anish smiled and sat down to listen.

“When you told me about your love that day, I felt very bad at first, then as if a burden on my head was lightened.” The smile disappeared from Anish’s face.

“You listen patiently, don’t get angry.” Veena came closer and put her head on Anish’s chest. Before marriage, I was deeply in love with someone. He was my neighbor. Played together since childhood, grew up, one choice, one mind, when and how they became a life’s dream. But both of us knew that our family members would not accept us because of being of foreign caste, so we never took any step outside the purview of our sanskars. We used to fall in love with each other only from a distance. Tried to persuade my family members with love but things got worse. When my family became thirsty for his life, he had to leave the city.

A few years ago, he got settled in Patna itself. She has opened a computer training institute, I knew that. You know how much I am fond of learning computer and its institute is also nearby, but I was not joining.

A lot of feelings of displeasure were getting dissolved in Anish’s eyes. “Because I didn’t want fire and straw to come together.” Veena continued, “But after you left, I went there in anger. But I got a lot of relief after going there. Things started happening to him. When I came to know that he is not married till date, I asked him the reason, do you know what he said? It is said that love happens only once in life. Everything else is a compromise and I don’t want to compromise.”

Leaving the matter incomplete, Veena planted a kiss on Anish’s lips and started loving him by hugging him. “You have said what you had to say, haven’t you?” Anish asked separating her from her arms.

“No. I don’t want to hide anything from you. In fact, on one hand, I felt so happy listening to her that my eyelids were filled with tears, but on the other hand, my heart started hurting for her. See, my experience and yours is different from that isn’t it? We have fallen in love again. So to explain this to him, to make him realize the happiness of married life, I had to do the same thing which happened that day by mistake while trying to console him. Like you people, our body and mind were also thirsty. Please forgive me for such infidelity.

“Do what you want, but tell me that you are lying to make me jealous” the next moment Anish was shouting angrily shaking her. A victorious smile appeared on Veena’s lips.

in the subject line E-Ishq don’t forget to write