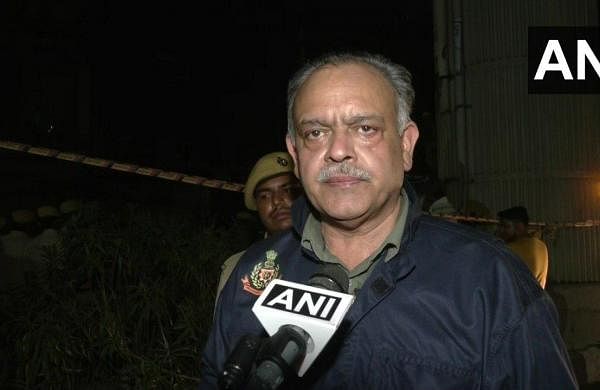 NEW DELHI: As many as 27 people died and 12 got injured as a massive blaze ripped through a four-storey commercial building in outer Delhi’s Mundka on Friday, police said.

The fire started from the first floor that houses the office of a CCTV cameras and router manufacturing and assembling company, they said, adding more than 30 fire tenders were pressed into service.

The owners of the company — Harish Goel and Varun Goel — have been detained, police said, adding the building-owner has been identified as Manish Lakra, who lived on the top floor, and that an FIR is being registered against him under relevant sections of the Indian Penal Code.

The Delhi Fire Service deployed cranes to rescue those trapped in the blaze.

However, the smoke from the fire spread to the entire building and some people jumped off through the windows to save themselves, while some others used ropes to climb down, with police saying a few of them got injured in the process.

The police said at least 27 people were killed and 12 injured in the fire incident. They did not, however, specify other details like the gender or age of the deceased.

According to the police, a call about the fire was received at 4.45 pm following which they immediately reached the building location, near metro pillar number 545. Police officials broke the windows of the building to rescue people, they said, adding the injured are admitted to Sanjay Gandhi Hospital.

During initial enquiry, the police found that the four-storey building was used for providing office spaces to companies.

Over 50 employees of the company whose office was located on the first floor were rescued while 27 bodies have been found, they said. Some ambulances were also made available at the spot to provide immediate medical assistance to the rescued victims.

The fire was “doused” around 11 pm, but cooling operations were underway, said a senior fire department official.

“Extremely saddened by the loss of lives due to a tragic fire in Delhi. My thoughts are with the bereaved families. I wish the injured a speedy recovery,” Modi said in a tweet. He said Rs 2 lakh each from the Prime Minister’s National Relief Fund will be given to the next of kin of those who lost their lives, and Rs 50,000 to the injured.

Shah said NDRF personnel were reaching the spot for scaling up the rescue operation.

Delhi Chief Minister Arvind Kejriwal expressed pain over the loss of lives, and said he was in constant touch with officers.

“Shocked and pained to know abt this tragic incident. I am constantly in touch wid officers. Our brave firemen are trying their best to control the fire and save lives. God bless all,” Kejriwal tweeted.

Delhi Health Minister Satyendar Jain visited the spot and took stock of the rescue operations. This is not the first time that Delhi has witnessed such a massive fire incident.

In December 2019, a blaze at an anaj mandi had claimed at least 44 lives, making it the most severe fire incident in the national capital after the Uphaar Cinema tragedy that claimed 59 lives and left over 100 injured in June, 1997.

The Uphaar theatre in the posh Green Park area was screening Bollywood film “Border” and several families were there to catch the movie featuring Sunny Deol on its release day — June 13, 1997.

But the movie outing turned into a mayhem as a massive blaze broke out during the 3 pm show.

Fourteen years later, a fire broke out at a meeting organised for transgenders at Nand Nagri, where almost 10,000 people had gathered, leaving 14 dead and nearly 30 injured.

In 2018, another massive fire ripped through a firecracker storage unit at Bawana that left 17 persons, including 10 women, dead.