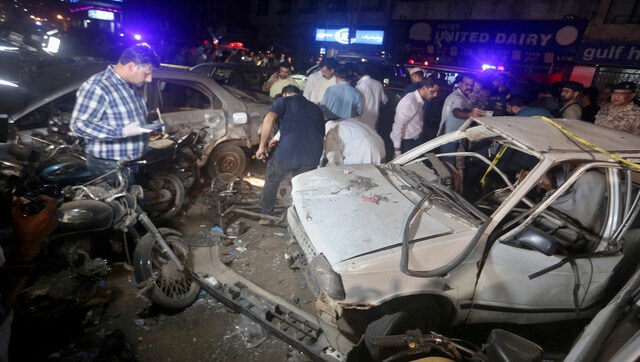 Last month, a suicide bomber killed three Chinese teachers and their Pakistani driver when she detonated her explosives inside a university campus in Karachi

Pakistani investigator examine the site of bomb explosion, in Karachi, Pakistan, 12 May, 2022. AP

However, according to a report by Dawn, Karachi police said the nature of the explosion was being determined and it would be “premature” to say whether the blast was intended to target a vehicle of Pakistan Coast Guard. He did, however, say that it was not the regular route of the maritime agency’s vehicle.

According to Sajjad Khan, a local police chief, the attack took place in the city’s Saddar neighborhood. No one immediately claimed responsibility for the bombing but Karachi has witnessed several militant attacks in recent years.

According to the preliminary probe report, it appeared that the IED was attached to a motorbike, Sindh Inspector General of Police (IGP) Mushtaq Ahmed Mahar said.

Rescuers took the victims to a hospital, where some of the wounded were said to be in critical condition. Khan said the explosion was so powerful that it damaged several cars in the busy area, known for its restaurants. The police chief provided no further details and only said two members of the security forces were among the wounded.

Prime Minister Shehbaz Sharif expressed regret over the incident and extended condolences to the deceased’s family. He prayed for the quick recovery of the injured and instructed Chief Minister Murad Ali Shah to provide the best medical care to them.

The prime minister said “terrorism will be wiped out” working in conjunction with provincial governments.

Last month, a woman suicide bomber dressed in a female burqa head-to-toe covering killed three Chinese teachers and their Pakistani driver when she detonated her explosives inside a university campus in Karachi.

A separatist group known as the Baluchistan Liberation Army from the neighboring Baluchistan province claimed that attack.

With input from agencies